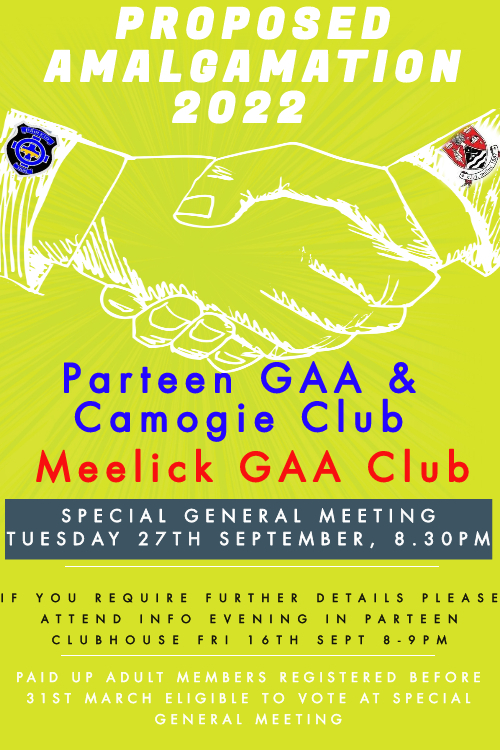 THE BELOW EMAIL WAS SENT TO ALL MEMBERS THIS EVENING - IF YOU DID NOT RECEIVE IT & WISH TO PLEASE CONTACT PARTEENGAACAMOGIE@GMAIL.COM:

As some of you may be aware, a small committee of club members from both Parteen GAA & Camogie Club and Meelick GAA Club have had several meetings recently regarding a proposed full amalgamation of both clubs. This committee has worked hard on this proposal and now has all the information to bring to our members.

As an Executive Committee we believe that this proposed amalgamation will greatly assist our parish in bringing GAA and Camogie to ALL our parish. We already have a solid foundation for the proposed new club with both clubs bringing together as one over 200 years of history, experience & camaraderie.

Attached please find a synopsis of the proposed amalgamation of both clubs, dates for your diaries and some frequently asked questions. (SEE BELOW)

If you would like any further information, we would encourage you to attend the information evening on Friday 16th September at 8pm, in Parteen GAA & Camogie Clubhouse.

** It is important to note that, according to the GAA rules, ONLY members paid & registered before 31st March 2022 will be eligible to vote at the Special General Meeting. Those eligible to vote will be contacted by a member of the Executive Committee in the coming days.

We look forward to your support in building and further developing a brighter future in GAA and Camogie for the whole parish.

On September 27th, 2022, at 8.30PM, the below proposal will be voted on at a Special General Meeting of Parteen GAA & Camogie Club.

As an executive, we believe that accepting this proposal has the following benefits for our club:

· Enables every adult and child in the parish of Parteen, Meelick & Coonagh to be an active member of the GAA family

· It would provide guaranteed access – at no cost – to a second pitch that is available most of the year. This is something that may not be possible to do in future years as other clubs in the area look to expand.

· It would expand camogie into Meelick

There are also some challenges in accepting this proposal:

· Integrate Meelick players and families into the club structure

The following is a list of questions you may have about the proposal. Should you wish to share any feedback or concerns about the proposal, there will be an information meeting on Sept 16th @ 8pm in the clubhouse. All club members are welcome to attend.

1) What would the new club be called?

2) Does this affect camogie?

· Yes. As Parteen proudly incorporates the One Club Model, the camogie teams would also play under the Parteen-Meelick name.

3) Who would be on the new club executive committee?

· If both clubs agree to the amalgamation, an AGM of the new club would be held before the end of November. Committee members would be proposed and assigned their position at this AGM.

4) What about the jersey?

· Any changes to team jerseys would be finalised by the new club executive committee before the commencement of 2023 competitions.

5) What about the crest?

· The crest would need to change (as the club’s name would change) and would also be finalised by the new club executive committee before 2023 competitions.

6) What about our new jerseys that we just bought?

· New jerseys would continue to be used until / if a decision is made to change (see Q4 above).

· Parteen GAA and Camogie club currently has an overall debt of €45K. Hall rental has been key to maintaining a manageable repayment structure.

· Meelick GAA currently have no debt

9) Who would be trustees of the new club?

· As per the advised best practice from Croke Park, we would move to the Corporate Trust Model. This would see Croke Park manage all issues in relation to liability and so all liability would be removed from current trustees and the club under this model.

· The new club executive committee would implement a Field Committee that deals with maintenance, etc. Seamus Spaight has advised that he wishes to remain as caretaker for the pitch in Meelick.

11) When will the meeting regarding the amalgamation take place?

· Upon receiving their respective proposals for amalgamation, both clubs have 21 days to hold a special general meeting. Based on current timelines, these would be run simultaneously in both Parteen and Meelick on September 27th 2022. There will be an open discussion prior to the vote – which will occur at the same time in both Parteen and Meelick.

12) Who is entitled to vote on the proposal?

· Parteen GAA & Camogie Club members over the age of 18 who have paid their adult membership on or before 31 March 2022 are entitled to vote on the proposal. Note that all club members are entitled to attend the Special General Meeting but only voting members can cast their vote (in accordance with GAA rules).

· Each voting member will be contacted prior to the SGM to ensure they are aware. On the night of the SGM, they will be required to sign in. They will then receive their voting document for the proposal. The vote will be by secret ballot. Notification will also be placed on the foireann system.

14) What percentage of the vote is required for the proposal to be adopted?

· For the amalgamation to be adopted by both clubs, at least 75% of both clubs’ respective voting members (in attendance on the night) must vote in favour of the motion. If either of the SGMs fail to obtain 75% approval, then the motion to amalgamate would not be adopted.

It was a tough week on the pitch with a couple of tough l...

A Special General Meeting will be held tonight, Tuesday 2...

Thank you to our club members and friends that attended t...

Huge congratulations to our Jnr B girls and their coaches...

Well done to all the teams that played last week and the ...

Get live information for Club on the ClubZap App